Fill Your Randy Days With the Blues

Randy Kaplan's got the blues and he's got it good.

Prolific recording artist Randy Kaplan has returned with his newest collection, "Mr. Diddie Wah Diddie," and he's preaching the blues for all ages.

We first stumbled onto Randy with his first release, "Five Cent Piece," in 2006. Already a revivalist with version of "We're in the Same Boat, Brother" and "So Long, It's Been Good to Know Ya'," Randy also turned the Rolling Stones' "You Can't Always Get What You Want" into an epic 10-minute story. But we got hooked on the whimsy of "Shampoo Me," the tale of a shark coming up through a child's bathtub drain and asking for help getting clean. 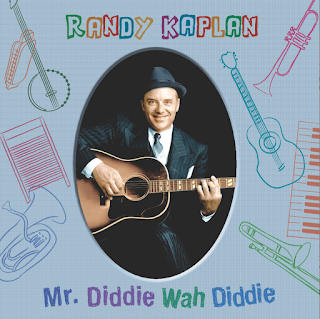 Randy now delves even further into his love of the music from the first half of the century with his fourth children's CD. He is assisted, so to speak, by narrator Lightnin' Bodkins, who drops by every few songs to help create a blues nickname for Kaplan and talk about the masters of the genre.


I hesitate to call "Mr. Diddie Wah Diddie" a concept album because it's neither a story cycle nor a pure period piece. Randy bends the blues -- call it light blues -- for easily-impressionable young minds. I like to peruse lyrics for songs before playing them for the kids. Imagine my surprise when I opened the (thick) liner notes booklet and discovered track-by-track history lessons for each song! From Robert Johnson to Blind Willie Johnson to Mississippi John Hurt, Randy breathes life into the stories behind the giants of the blues.


Randy shifts the focus away from adult themes and into the wheelhouse of the under-12 set. "Jackson Blues" becomes "Runaway Blues" as Randy recounts a time he ran away from home. "Kindhearted Woman Blues" is "Kindhearted Babysitter Blues," about a child worried that his regular sitter is "cheating" on him by watching another youngster. You even learn how to deal with a bully through the blues ("You've Been a Good Old Wagon").

My wife commented that the narrative blues style is well-suited to Kaplan's trademark story songs. "Mr. Diddie Wah Diddie" is an extension of his established performance persona. With his porkpie hat at a jaunty angle, kids know immediately that they are not about to get the usual laundry list of jingles and jangles. Unless they are educated about Bojangles, perhaps.

The CD is clearly a labor of love for Randy. They may be old songs but he doesn't let them feel old. Randy has kept the arrangements faithful, while updating the material for a savvy, youthful generation. Who knows? Bringing home "Mr. Diddie Wah Diddie" might even make your children start to sing the blues.


"Mr. Diddie Wah Diddie" is available from MyKazooMusic,  Amazon, and through iTunes. You can watch his videos on MyKazooTV.
Posted by MrJeff2000 at 8:12 AM