Jim Henson realized that puppets make learning easier (and more fun). A puppet's primary appeal (tactile look and interactive feel) is thwarted through the aural medium. Nevertheless, performers persevere. And video provides a way to introduce those puppets to a new audience. As the world reopens and live concerts blossom anew, those performers prepare to engage with those kids. And that's exactly what Esther Crow, founder of Thunder & Sunshine, is experiencing right now as she mounts a summer tour to support for her solo CD, ALL TOGETHER NOW. 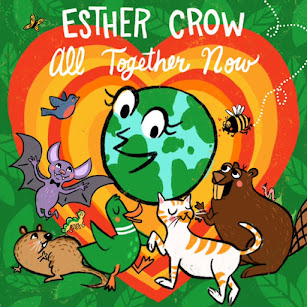 Esther spent her pandemic year pivoting to remote showcases, like many other children's music performers. She also made the decision to use more ecologically- and socially-conscious material. Coronavirus demonstrated the ability of kids to adapt to new circumstances. We can't go back to the way things were (denying climate change, suppressing votes, minimizing minority expression) and Esther used her voice (sometimes with puppets created by Jeff Lewoncyzk) to distract, amuse, but also educate her young audiences.
Like many artists in the kids' music space, Esther's resumé looks like a Venn diagram, with a punk rock band (The Electric Mess), her six-woman children's band Thunder & Sunshine, and her solo career, as well as numerous songwriting competitions and awards. The 10 tracks (and additional interstitial puppet intros and sketches) on ALL TOGETHER NOW were helmed by Grammy-winning über-producer Dean Jones.
The jazzy "Bees, Beavers, and Bats" features Esther and Grammy winner Lucy Kalantari sharing vocals about how these creatures assist with photosynthesis and other facets of nature. "Ocean" is a soaring ballad (and environmental call-to-action) about the importance of these bodies of water across the planet. There are also soulful songs about creatures such as "Inchworm," (not the classic kids tune), "Caterpillar," (not the truck) and "I'm A Muskrat." Esther brings everything into 20/20 focus with the first single from the album, "It's So Easy Bein' Green" and "Hard To Be Happy," an emotional response to our shared pandemic ordeal. As the world heals and kids demand normalcy sooner rather than later, Esther delivers music (and puppets) that brings everyone all together now.
ALL TOGETHER NOW is available from Esther Crow's website, Amazon, and Apple Music.

Here is the video for the song "Hard To Be Happy":