There's always something going on with the Not-Its! and that's alright. As Yoda would say, "Are alright, the kids." 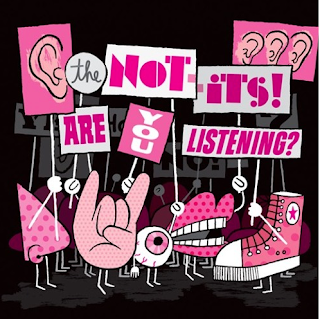 The Not-Its! are into their second decade of entertaining children and parents with their full-throttle "real rock band" sound (the band released its first album way back in 2009). The group's sixth studio CD, ARE YOU LISTENING? will have kids dancing and singing with their "outside" voices.

Yes, that's six albums in seven years. Did I mention the band has 10 children between its five members (Sarah Shannon, Danny Adamson, Tom Baisden, Jennie Helman, and Michael Welke)? Where they find the time to be this creative? Well, Seattle does love its coffee...

While tackling the usual assortment of real-world kid issues, the Not-Its! don't scrimp on the guitars and drumbeats. Instead, they dig right in and drag the tots with them. "Don't Fear the Dentist" starts with a Black Sabbath-esque riff circa "Iron Man." Academic requirements get a grunge/garage anthem in "Done With the Science Fair." You won't find a happier, happening, independent-thinking figure than the tutu-and tie-wearing "Kid of the Week." I'm surprised there hasn't been a message song like "Washington, DC," with its chorus, "Can you hear me?" and the following ironic verse:

I'll meet the President. I don't need an appointment.
Hanging on the White House lawn with the Secret Service looking on.
Talking foreign policy. Maybe we won't agree.
Then we visit the C.I.A. I introduce myself but they already know my name.

ARE YOU LISTENING? is not a "cool-down" CD. Don't expect much in the way of soft ballads (there isn't one). The Not-Its! are too busy providing solid rock for kids, who get enough of the sweet-and-mellow stuff from other outlets. The tune about elders, "Granddad Is A Spy," harkens back to a Ramones song being slowed down from 45 to 33 RPM so Pop-Pop can understand the lyrics.

I'm on the record saying that if I had to live in another part of the United States, I would chose San Francisco. However, based on the voluminous number of children's musical acts from the Seattle area (including Caspar Babypants, Recess Monkey, Harmonica Pocket, with Lori Henriques and others 173 miles away in Portland), I am honestly reconsidering my selection. Are you listening? With the Not-Its!, that's a mission. And that's alright.

ARE YOU LISTENING is available February 19 from the band's website, Amazon, iTunes, and Bandcamp. See the band at Symphony Space on Saturday, January 23.

Here is the new video from the band's song, "Dance With Me":